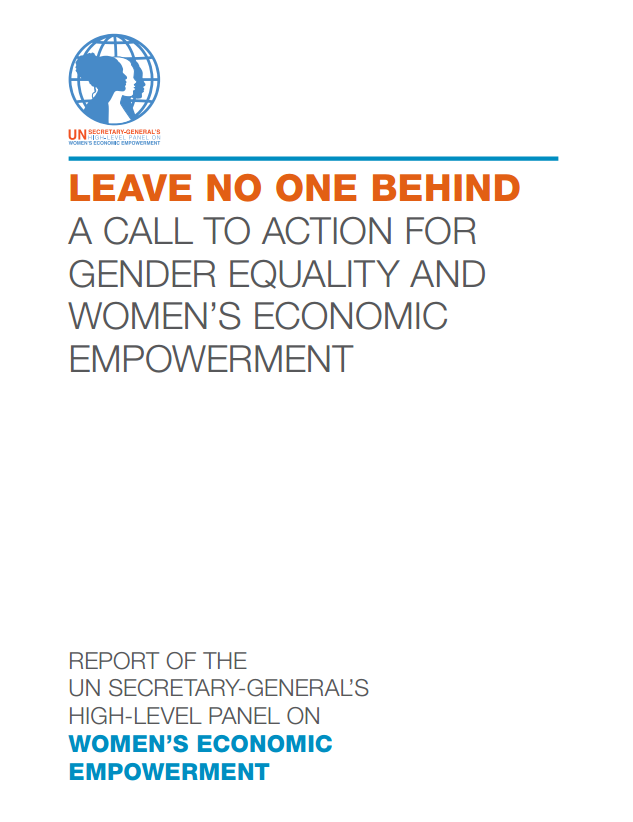 This report is a call to action. To realize the Sustainable Development Agenda, there is a pressing need to step up actions to close gender gaps and ensure the full economic empowerment of women. After six months of fact finding, sharing best practices and consulting around the world, the Panel presents its findings about proven and promising actions to address gender gaps and accelerate progress. The High-Level Panel hopes that this report and its ongoing actions and commitments will serve as a call to action to men and women around the world to join together in a global campaign to achieve gender equality and women’s economic empowerment.

Empowering women in the economy and closing gender gaps at work are central to the 2030 Agenda for Sustainable Development. Yet too many gaps persist. How to accelerate progress? Through concrete actions by individuals, businesses, governments, worker and employer organizations, civil society, and multilateral institutions to drive change by addressing systemic constraints. Expanding women’s economic opportunities is central to the 2030 Agenda for Sustainable Development. More than two decades after the landmark 1995 United Nations (UN) Conference on Women in Beijing and with the unprecedented consensus on the 2030 Agenda, the global commitment to gender equality has never been stronger. For the first time in history, governments have set a concrete deadline for the elimination of gender inequality—the year 2030. And the potential gains for basic human rights, for human development and for economic growth have never been larger.

At the September 2015 UN General Assembly, governments from across the world adopted the 2030 Agenda, with goals to improve lives for all. Applying to all countries and promising sustained, transformative change, the Agenda commits to leave no one behind—not women, not children, not minorities, not migrants, not indigenous people, not people with disabilities. More than that, those who are farthest behind must be moved to the top of the global community’s agenda. Today around 1 billion people continue to live in extreme poverty, many of them women and children. The economic empowerment of women—to succeed and advance economically and to make and act on economic decisions—is a cornerstone of the Sustainable Development Goals (SDGs). Over the past two decades, there has been progress in closing gender inequalities, especially in education and health. Yet there still is much to do to achieve the full and equal participat