WE EMPOWER - G7 Programme in Canada 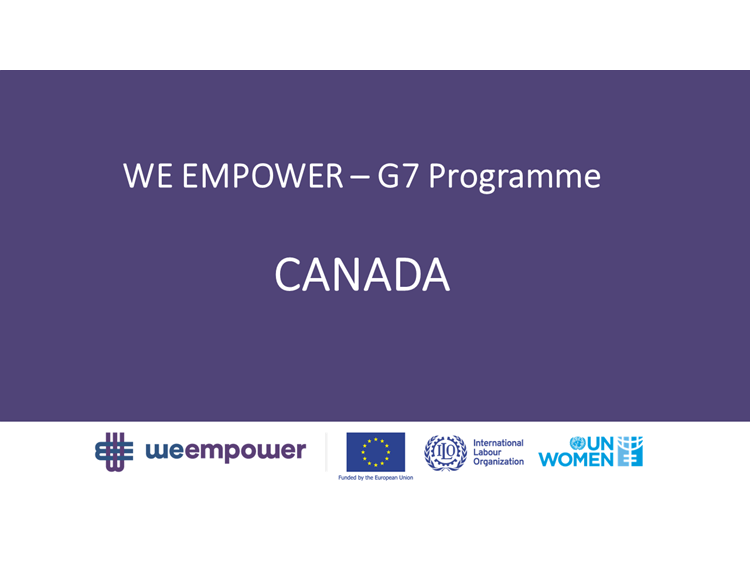 In Canada, our two-track approach seeks to engage the private and public sector to support gender equality and women’s economic empowerment in the workplace, marketplace and community. The first track focuses on women’s economic empowerment policies by convening multi-stakeholder dialogues. The second track targets the private sector, by encouraging the Canadian private sector to support the Women’s Empowerment Principles. In Canada, our focus is on four main priority areas:

In Canada in 2018, on average a woman earned 87 cents for every dollar a man earned. The gender pay gap translates to the equivalent of 47 days women worked without pay. The wage gap is even more pronounced for indigenous, other racialized women, immigrant women and women with disabilities. According to data from the 2016 Census:

· Other racialized women working full time earned on average 67 cents for every dollar earned by non-racialized men; and

On December 13, 2018, the Government of Canada passed the Pay Equity Act (Act). Once in force, the Act will require federally regulated employers with 10 or more employees to proactively examine their compensation practices and ensure that men and women receive equal pay for work of equal value. Among other things, employers will be required to establish and maintain a pay equity plan that examines whether there is a difference in compensation between positions mostly held by women and those mostly held by men, that are deemed to be of equal value. If the pay equity plan identifies any differences, employers will then be required to increase the compensation of positions that are mostly female to eliminate those differences and then maintain pay equity.

Also, in 2018, the Government of Canada announced the introduction of pay transparency measures that will provide Canadians with accessible, online comparative information on the wage gaps of employers in the federally regulated private sector covered by the Employment Equity Act. These measures will raise awareness of wage gaps that affect women, Indigenous peoples, persons with disabilities and members of visible minorities, helping to shift business culture and expectations towards greater equality.

Our work in Canada aims to close the gender wage gap across Canada by raising awareness about pay transparency measures as well as identifying and sharing best practices in pay equity.

Women bear a disproportionate responsibility for unpaid care work which directly and negatively impacts their participation in the labor force. In Canada, women spend an average of 2.8 hours per day on housework, 54 minutes more than men (1.9 hours per day).

Parental leave policy in Canada recently introduced, encourages the other parent to take longer parental leave with an additional five to eight weeks of benefits. Our work in Canada aims to showcase best practices in the workplace that support work life balance.

The world of work is changing marked by transformation and technological innovations presenting both challenges and opportunities for women’s economic empowerment in the 21st century workplace. Despite increase in women with STEM degrees, the percentage growth of women working in STEM fields has been slow. In 1987, the STEM workforce was 20 percent women in 2017 it was 23 percent with women representing 28 percent of STEM graduates.Women’s economic empowerment is intricately connected to our ability to participate in the design, use and production of technological advancements.

Our work in Canada centers on seeking best practices to increase women’s recruitment, promotion, and retention in STEM sectors through the transformation of the workplace.

Canada is strongly committed to supporting trade opportunities for women with an inclusive trade agenda. However, the benefits of trade continue to be subject to gender barriers. Women own 16 percent of all small- and medium-sized enterprises in Canada, and only 11 percent of them are active outside Canada. Only 2 percent of small and medium sized business in Canada that are either women-owned or women-led are exporting their products and services.

In 2018, the Government of Canada announced the Women Entrepreneurship Fund which aims to provide support to women entrepreneurs to grow their businesses and pursue market opportunities abroad.

Our work in Canada seeks to highlight women entrepreneurs and identify best practices for scaling and growing women-owned businesses outside of Canada.

Want to know about WEPs? Watch this video and learn more about the Women’s Empowerment Principles.

Want to join the WEPs community? The CEO of your company should complete the CEO Statement of Support and upload here.