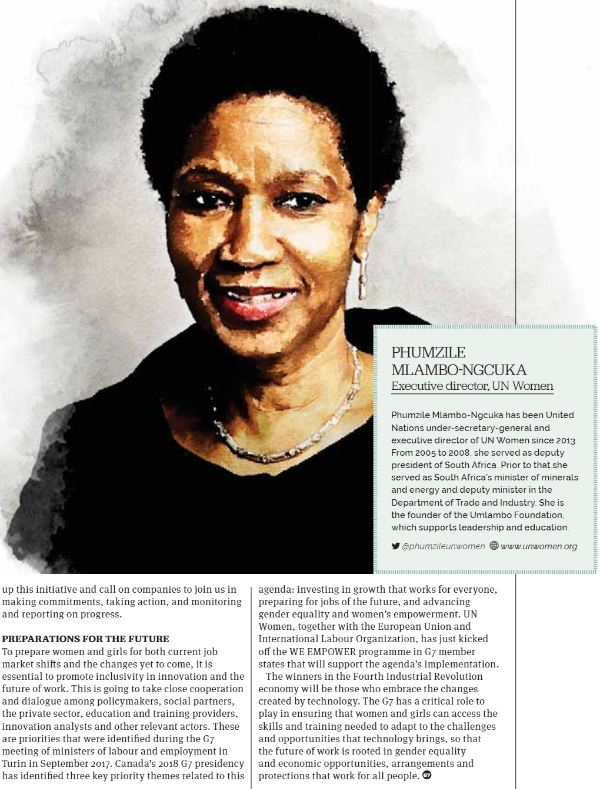 
Today, there is digital transformation almost everywhere in the world. From cloud computing and artificial intelligence (AI), to blockchain technology, automation and the ‘Internet of things’ arising from smart vehicles and appliances, technological advances are transforming nearly every aspect of today’s businesses. These developments have significance beyond systems and devices, both reflecting and further influencing cultural changes within the workplace, marketplace and community. How do these transformations in profession, skills and workplace culture affect and impact women? With employees increasingly seeking out flexible working arrangements, emotional satisfaction and quality of life in their jobs, the new constant in the workplace seems to be change itself.

It is up to us to ensure that women, men, girls and boys have the skills to adapt to these changes. If girls and women do not have access to, control over and full use of technology, they will simply be left behind.

The World Economic Forum’s Global Risks Report 2018 noted the disruptions caused by intensifying patterns of automation and digitalization, recognizing them as potential drivers of growing inequality, especially when coupled with structural unemployment or underemployment. We have the opportunity to reverse these disruptions to instead serve humanity in its entirety, and particularly women and girls.

Critical elements to tackle are the growing skills gaps between women and men in the workplace and marketplace, and the underlying root causes of those gaps. In the United States alone, up to 73 million jobs may be eliminated by 2030, but only about 20 million of the workers displaced will be easily transferable to other industries. This creates a skills mismatch that can result in a global talent shortage. For instance, Manpower reports that 83 per cent of employers in Japan, 40 per cent in Europe and 32 per cent in the US have difficulties filling their job vacancies for reasons such as a lack of applicants and the fact that those who do apply do not have the necessary skills or experience.

To bridge this gap, we need to incentivize new career paths, including for mid-career workers, and open up routes into the tech industry for those who are already users of technology but come from other fields, such as artists, sociologists, lawyers and workers with strong emotional intelligence, whose skills are complementary in increasingly AI-reliant workplaces. The next generation of workers must be better prepared to use technologies such as AI, advanced robotics, and 3D printing as well as cultivating essential 21st century skills, such as creativity, problem solving, originality, empathy, adaptation and cultural and gender awareness.

Education systems also need to adapt to the changing world of work, for example providing opportunities for multidisciplinary learning, where foundational or optional technology courses can be introduced to non-technology majors. An even more urgent gap to fill is that of training teachers to become competent ICT users who can embed technology in all the subjects they teach.

G7 governments have a vital role to play in addressing these issues, mainly by investing in skills development programmes and vocational trainings. Empowering self-employed women and women in vocational training was one of the key priorities for the German presidency in 2015.

We need vocational education that is offered virtually, both on- and offline or through blended options. UN Women is addressing this through our virtual skills school, WeLearn, which will work with companies to grow a pipeline of experienced and knowledgeable professionals by focusing on jobs of the future, 21st century skills, entrepreneurship and gender-responsive procurement for companies to expand their purchasing from women-owned business. The significance of this intervention will depend on its scale. The more women we reach the better.

Open-source, accredited virtual education at the tertiary level also needs to be an option for training teachers, social workers, climate-smart agricultural extension officers, health workers and other professions where there is a demand for trained service providers in communities.

The Commission on the Status of Women in 2017 focused on women’s economic empowerment in the changing world of work, including recommendations on strengthening of science and technology education policies and curricula to ensure their relevance, and to enable entrepreneurial women to leverage science and technology for economic gain, including those in the informal sector.

UN Women is engaging with the rel="noopener noreferrer" private sector to help close the skills gap, for example through the Women’s Empowerment Principles (WEPs). Endorsed by intergovernmental fora such the UN General Assembly, the G7 and the G20, the seven Principles holistically address key issues such as work-life balance and gender-responsive supply chain practices, and tackle the gender pay gap and sexual harassment in the workplace. There are currently more than 1,800 CEOs working to align their businesses with the WEPs, and we continue to scale up this initiative and call on companies to join us in making commitments, taking action and monitoring and reporting on progress.

To prepare women and girls for both current job market shifts and the changes yet to come, it is essential to promote inclusivity in innovation and the future of work. This is going to take close cooperation and dialogue among policy-makers, social partners, the private sector, education and training providers, innovation analysts and other relevant actors. These are priorities that were identified during the G7 meeting of Ministers of Labour and Employment in Turin in September 2017. Canada’s 2018 G7 Presidency has identified three key priority themes related to this agenda: investing in growth that works for everyone, preparing for jobs of the future, and advancing gender equality and women’s empowerment. UN Women, together with the EU and ILO, has just kicked off the WE EMPOWER programme in G7 countries that will support the agenda’s implementation.

The winners in the Fourth Industrial Revolution economy will be those who embrace the changes created by technology. The G7 has a critical role to play in ensuring that women and girls can access the skills and training needed to adapt to the challenges and opportunities that technology brings, so that the future of work is rooted in gender equality and economic opportunities, arrangements and protections that work for all people.