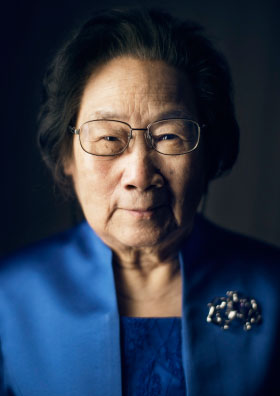 Youyou Tu was born and raised in Ningbo, China. She won the Nobel Prize in Physiology or Medicine in 2015 for her work in artemisinin and dihydroartemisinin, both compounds used to treat malaria. She is the first Chinese citizen to receive a Nobel in physiology or medicine and the first woman of the People's Republic of China to receive a Nobel Prize in any category.

Tu attended Peking University Medical School from 1951-55 after completing her schooling in Ningbo. She studied at the Department of Pharmaceutical Sciences during her time at university. After graduation she was trained in traditional Chinese medicine for two and a half years. Immediately after graduation, Tu sought employment at the Academy of Traditional Chinese Medicine (now the China Academy of Traditional Chinese Medical Sciences in Beijing). In 1980, she was promoted to Researcher (equivalent to the academic rank of a full professor in other countries). Currently she is the Chief Scientist in the Academy. Despite having no postgraduate degree, no international research experience and not being a member of the Chinese National Academies, she managed to make a significant contribution towards the treatment for malaria to this date.

Tu started her research in the 1960s-70s when China was undergoing the Cultural Revolution. During this time, Chinese scientists became involved in the fight against malaria during the Vietnam War. Ho Chi Minh, the leader of North Vietnam requested Zhou Enlai, the Premier of China for help in developing a treatment against the disease. As a result, a top secret drug discovery project called Project 523 was set up by Mao Zedong and Tu was a part of. Her initial role was to study patients affected by malaria.

While other scientists were busy screening thousands of compounds with no success, Tu thought of a unique idea - to screen herbs found in traditional Chinese medicine, an area that had not been looked at in the context of malarial medicine. She followed a methodical approach whereby she first looked at the traditional medicine practices in historical books and then undertook tours to meet modern-day practitioners. She summarized her findings in a notebook called A Collection of Single Practical Prescriptions for Anti-Malaria, which was seen to contain 640 prescriptions. Her research team screened over 2,000 traditional Chinese recipes and made 380 herbal extracts, which were ultimately tested on mice.

In the course of her research, she found one compound that proved to be effective: artemisinin. It derives from the sweet wormwood (Artemisia annua) plant, which had previously been used for "intermittent fevers," which happened to be one of malaria's main symptoms. The method for its extraction had been encountered in a 1,600-year-old text, in a recipe titled, "Emergency Prescriptions Kept Up One's Sleeve". Tu was not successful at first, as her team had attempted to extract the active ingredient from the herb with traditional boiling water. Shortly after, she discovered that a low-temperature extraction process should be used instead to isolate an effective antimalarial substance from the plant as hot water was thought to have damaged the active ingredient. Subsequently, animal tests conducted showed that the isolated compounds were completely effective in mice and monkeys.

Tu also volunteered to be the first human subject to establish the safety of the anti-malarial compound she had extracted for human beings. After establishing the safety, successful clinical trials were conducted. Initially, her work was published anonymously, but in 1981, she presented the findings relating to artemisinin at a meeting with the World Health Organization (WHO). Tu also discovered the chemical structure and studied the biological activity of artemisinin extensively.

In 1973, as a result of an attempt to confirm if the carbonyl group exists in the chemical structure of the artemisinin molecule, she accidentally synthesized dihydroartemisinin. Today, many artemisinin-based drugs have been developed and have led to the survival and improved health of millions of people.

Education Concepts of WEE
7 of 7 comments