Beyond Financial Inclusion, Learning About Life 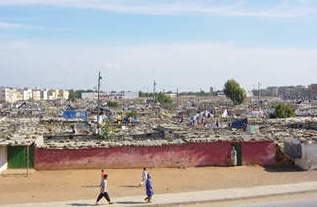 Her name is Fatima. When she finally enters the room where we are holding our focus group on health insurance in Morocco, she is clearly the oldest of the five women around the table. Dressed in a traditional, embroidered garment, complete with a billowy, white veil, she is also the most elegant. We don't know yet what her sparkling eyes have seen nor what her thoughts are, but her eyes are as her name means: captivating.

I sit there and listen to her speak in French-peppered Arabic, as they use in Morocco. La mutuelle. La carte. L'assurance. I am fine. El Hamdullillah. Fatima is a joyful person. She tells jokes and cheers up her co-group members. But her life is difficult.

We show her the health insurance brochure with nice little icons and she says that she can't read. This is common for people this age in the region. What's the point of reading if you are supposed to stay home or get married and give birth and if the man is supposed to feed the family? Also the school system was not the top priority when she was young.

Over the course of the focus group conversation, we learn that she is married. She thought she could have none of her own children and accepted that as God's will. But she never accepted that she would not be a mother, so she adopted two. But then she got pregnant and had two biological children. A boy and a girl, or as the Arab cultures say “one child and one girl.” They love girls but boys seem to be somehow… more. Something like a real child.

She can't hold back her tears when we start talking about each of their health concerns. She talks about her thyroid cancer, the treatment that she needs to take and what it costs her. She works hard in the hammam, a Moroccan steam room heated to 113° F (45° C), because her husband is unemployed and her daughter needs money since her husband left her. He left her because she is also sick—a gluten allergy that makes her so weak that she has lost a lot of weight. But the worst of the story is still to come. Quietly, she tells us that her son, then 19 years old, died from a heart attack in front of her. He was sitting in an armchair with his headphones on and did not move. She thought at first that he was sleeping but there was a pearl of blood on his mouth. In my head, I have this feeling to cry. 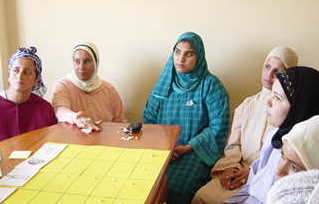 Fatima has been a client of our network member, Al Amana for the last 22 years. Twenty-two tough years. Years of doubt and endless effort to make ends meet. Years of taking responsibility for her family. Years of paying back her loans, week after week, month after month. Never late. She reveals to us that she believes that this is the reason why she got the highest insurance pay-out in the group for her illness. It is not true of course; it is actually because she has the most serious illness among all of them. But she does not know how payouts are calculated, she does not remember what was explained to her when she was first signed up to the insurance. This is a red flag for us of course, access without understanding isn’t real financial inclusion after all, but when you see the light on Fatima’s face when she recalls the day she got her 5,000 dirham payout and the almost disbelief that the hotline she called actually sent an ambulance that brought her to the hospital in 20 minutes, it makes you wonder... does it matter?

I listen to her story - completely stunned. It is these moments that I love my job most. When you have the opportunity to meet such a strong person. Your life vanishes in the background and your own problems seem so small compared to our clients’ daily lives. But these stories not only serve to inspire us; they are part of the foundation of building an affordable, client-centric product that is truly meaningful, that truly makes a difference in the lives of low-income women, like Fatima.

Our job at Women's World Banking is a tough mix of influencing, traveling, planning, innovating but also listening. Sometimes, hopefully often, understanding. When you meet those clients, all your work—the phone calls, emails, meetings and PowerPoint presentations—get real, fast. The lives of the low-income women we seek to serve tells you what tough really means. And life can teach quite a bit.

Gilles Renouil joined Women’s World Banking in 2015 to lead the insurance practice for the Product Development Team. In this role, he is responsible for managing all insurance related engagements, replicating existing products with network members and associates, developing new services and providing strategic direction in the insurance area. Gilles brings more than 15 years of international insurance and reinsurance expertise. Prior to joining Women’s World Banking, he served as a Director at Swiss Re Company Ltd. where he held different roles in risk management and group underwriting strategy. In his last role he was head of market dynamics and opportunities where he developed Swiss Re’s approach to Cyber risk insurance with a team of 15 experts and worked as an operational consultant on the design of an innovative microinsurance product in Nicaragua. Prior to Swiss Re, Gilles worked for Allianz in Germany and Spain, where he developed several innovative products. He holds a MSc. from École Nationale des Ponts et Chaussées and is a Civil Engineer by training. He speaks fluent French, German, English, Spanish and conversational Modern Greek.
Photographer & Videographer Credit: Courtesy of Women's World Banking