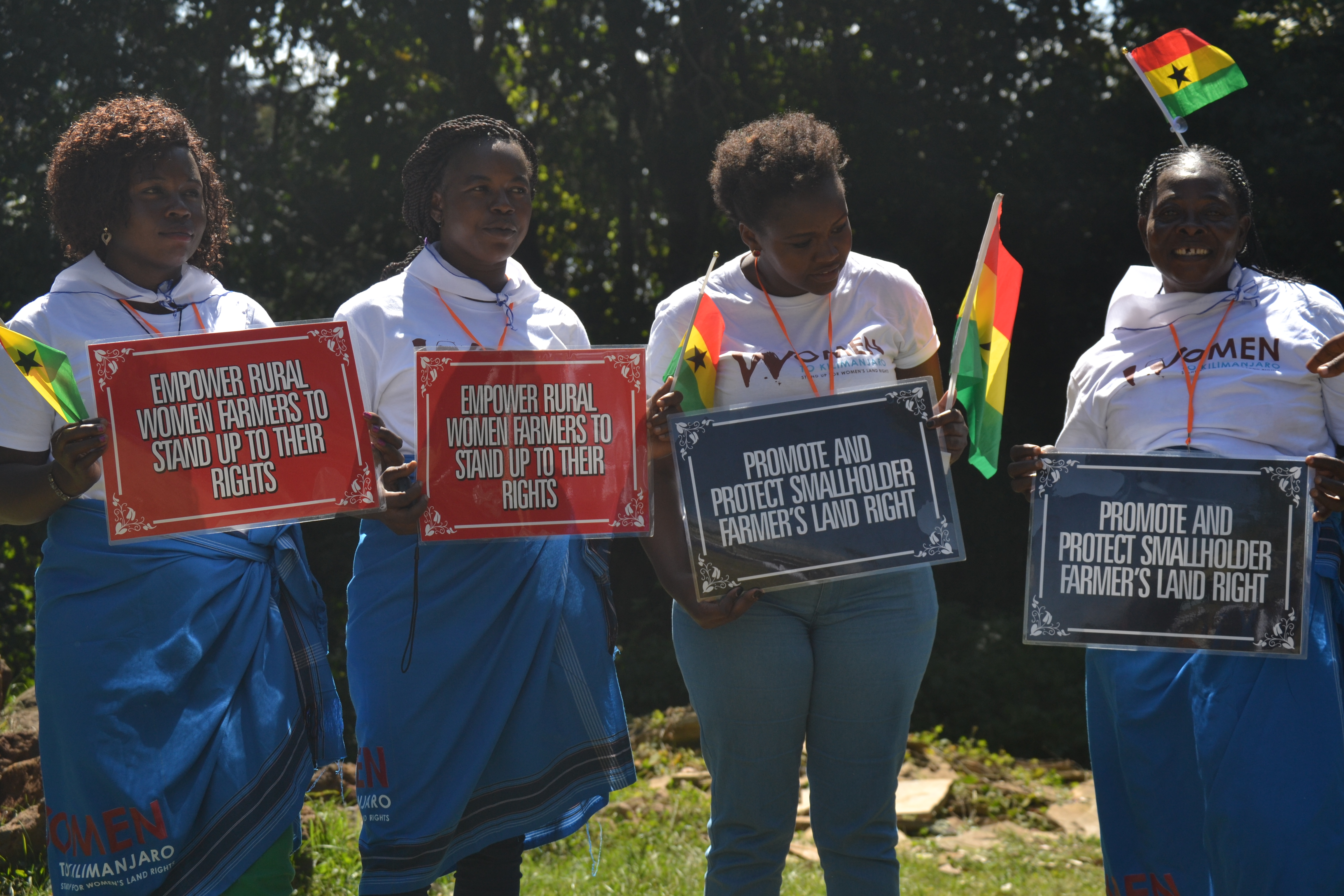 In October 2016, more than 400 rural women from 22 countries participated in the Kilimanjaro Initiative Rural Women’s Mass Assembly than culminated with the ascent of Mt. Kilimanjaro by 26 women to raise awareness on their right to land. Leah Mugehera, Oxfam Programme Officer - Women's Land Rights - Pan Africa Programme, comes back on that event and depicts a striking picture of the broader land issue in East Africa.

Women experience barriers in almost all aspects of their lives. This includes economic deprivations and barriers to access and control over natural resources including land. Generally in Africa, women are still struggling to secure their rights to land.

In most African communities, which are entirely patriarchal, land is inherited by men. Land ownership and access are largely vested in lineages, clans and families. Traditions often consider land as a source of social status within the community and society as well as a form of identity and cultural heritage.

Land is however fundamental to the economic activities on which farmers (mostly rural women) depend on for their livelihoods. Land acts as a security especially when approaching financial institutions for loans. It is a means of agricultural production in rural areas, a space for nurturing livestock and a place to gather other forms of natural resources. Land ownership also increase social inclusion. Gender inequalities on access and control over land and natural resources are therefore a key impediment to sustainable development and women’s economic empowerment.

Women do not have full rights to land and would only have secondary access through male relatives. These patriarchal land ownership systems contribute immensely to high percentages of women in poverty and further reinforce gender inequalities.

The situation is not any different in East Africa. Women are only granted access to land through their husband or their sons in case of inheritance after the death of their husbands. There are no equal inheritance rights to land for women. In most cases, land is registered or ascribed to the name of the eldest male member within the household, excluding women from land ownership.

The rights' and economic cases

Women’s Economic Empowerment is essential and a top priority in the work to reduce poverty. It is a prerequisite for sustainable development and pro-poor growth. More specifically, it contributes to the achievement of Sustainable Development Goals (SDGs) 1 and 3, on eradication of all forms of poverty and on ending hunger and achieving food security respectively.

Women play a significant role in agricultural sector as producers. A majority of women in Africa live in rural areas and depend on natural resources for agricultural production to sustain their families. They produce around 80% of the food in Africa and own 1% of the land. This situation is deteriorating with the exploration of minerals by large scale investors who in turn result to land grabbing. More equitable access to land urgent not only to strengthen women’s rights, but to increase agricultural productivity, reduce hunger and promote economic growth.

The Road to Kilimanjaro

Throughout the past, efforts have been made by NGOs to front the issue of women’s access and ownership to land in various advocacy platforms. The notable absence of rural women in those spaces led to the birth of the Kilimanjaro Initiative in 2012. Conceptualized by rural women and NGOs working on land issues at a meeting in Dar es Salaam, Tanzania, this initiative aimed to mobilize rural women across Africa to voice their issues around discrimination in access to and control over land and natural resources. This meeting was an ideal platform for rural women to present a charter of demands on their rights to land to representatives of regional bodies and government officials.

The Kilimanjaro Initiative was supported by an interagency group including Oxfam, International Land Coalition (ILC), Action Aid, Women in Law and Development in Africa (WiLDAF), Tanzania Gender Networking Programme (TGNP) and the Institute for Poverty, Land and Agrarian Studies (PLAAS). These organizations were responsible for the mobilization of rural women through partners and projects (on land, food and agriculture) they work on.

In October 2016, more than 400 rural women from 22 African countries participated in the Kilimanjaro Initiative Rural Women’s Mass Assembly. This event was one of a kind, with regional caravans coming from East, West and Southern Africa for public sensitization and advocacy activities on women’s land rights.

The second phase had 26 rural women climb Mt. Kilimanjaro, the highest mountain in Africa. The ascent took five days and 11 women made it to the highest point - Uhuru Peak. The journey up the mountain symbolized the struggles rural women encounter in obtaining their rights to land. Hence, the climb provided an avenue for them to place their demands at the top of the policy agenda.


They were also part of the regional caravans with several sensitization activities held throughout the journey to Tanzania. Oxfam in Malawi managed to sponsor two women climbers (Bertina Spriano and Agnes Levison) who made it to the highest peak.

The last phase of the Kilimanjaro Initiative was a rural women’s mass assembly attended by more than 400 women to discuss the various issues around land experienced in their countries. Government officials, representative from regional bodies such as the African Union Commission (AUC), the Southern African Development Community and the East African Legislative Assembly also attended the event.

A charter of demands was presented by the rural women and signed by AUC officials as a commitment towards the implementation of an all inclusive African women’s charter.

Successes from the Kilimanjaro Initiative

This article was first published on wee.oxfam.org.