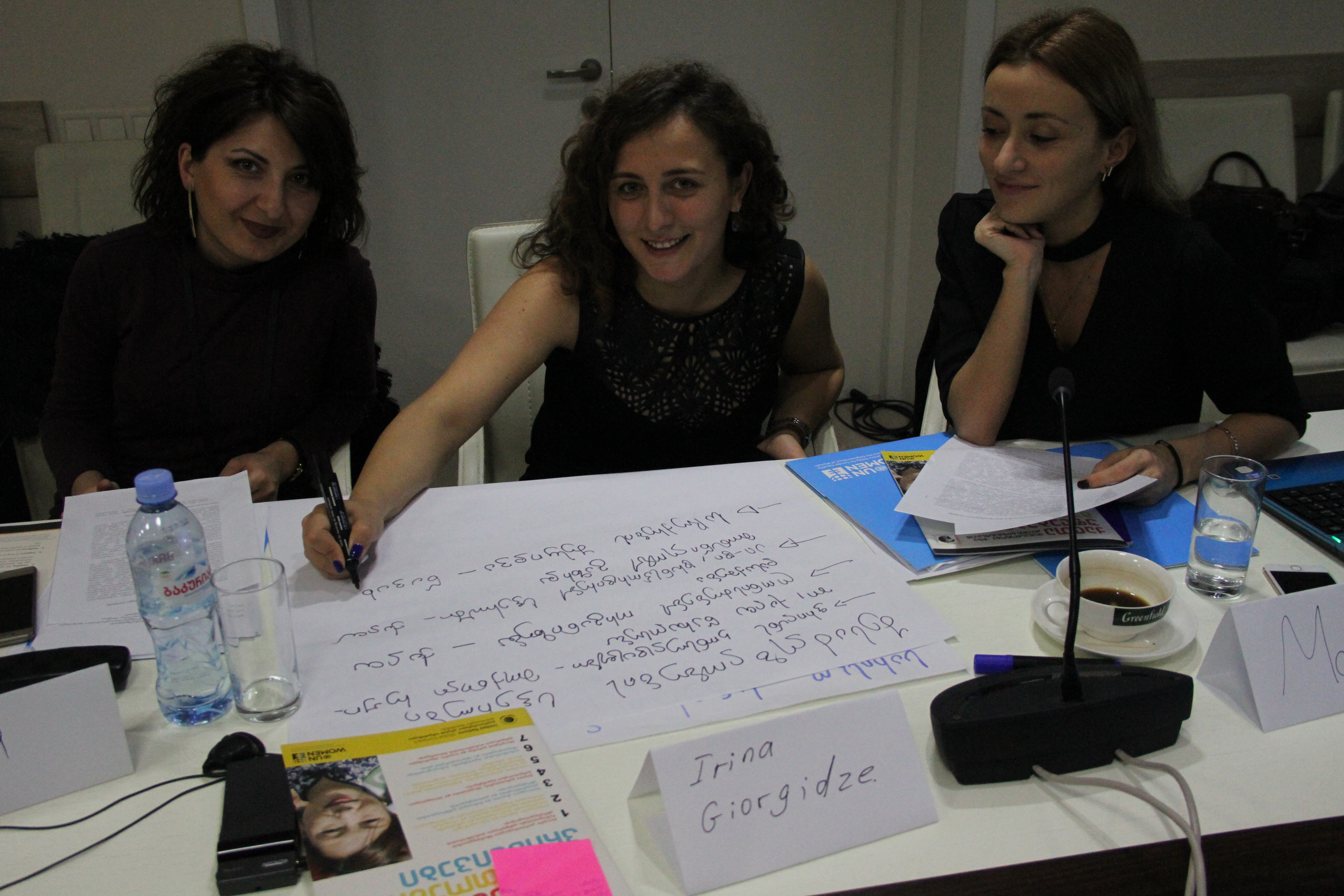 During a roundtable organized by UN Women, representatives of the executive branch of the Government of Georgia, private businesses and civil society organizations met to discuss the challenges and opportunities for women's empowerment through responsible business practices and active government policies. Among the main opportunities identified were: zero-tolerance stance towards sexual harassment and challenging of stereotypes related to women's and men's roles in the labour market.

In 2016, the Government of Georgia adopted the Human Rights National Action Plan 2016-2017, which makes a specific mention to promoting the Women's Empowerment Principles (WEPs) developed by UN Women and the UN Global Compact. In Georgia, women are often found in lower-paying sectors and positions, earning 63 per cent, on average, of what men earn (Geostat, 2015). Thus, developing the gender dimensions of corporate social responsibility (CSR) represents a major opportunity to promote women's positions in the economy. To this end, UN Women has actively been providing trainings and technical assistance to private companies for their implementation of the WEPs.

To further support the implementation of the National Action Plan, UN Women, in partnership with the Human Rights Secretariat of the Administration of the Government, conducted a training on gender equality and responsible business conduct for representatives of ministries in charge of economic and labour policies. The training ended with a round-table discussion bringing together representatives from government, business, trade unions and civil society to discuss the challenges to and opportunities for gender equality in the workplace, the marketplace and the community.

UN Women Country Representative Erika Kvapilova opened the round-table discussion with the following remarks: “The role of the private sector is crucial if we want to achieve equal rights and opportunities for women and men. The basis for UN Women’s collaborations with the private sector are the Sustainable Development Goals, which underline, on the one hand, the importance of gender equality for sustainable development for all and, on the other hand, the significance of the contributions of all actors – public and private – to reach these goals.”

During the discussion, maternity protection – especially the right to return to work after maternity leave – was brought up as an area of concern, despite strengthened legal protection as part of the 2013 amendments to the Labour Code. The lack of clear regulations and legal sanctions against sexual harassment was another challenge identified; several of the present companies were planning to address this challenge through the creation of internal complaints mechanisms. The companies also plan to address discriminatory gender stereotypes by encouraging women’s participation in traditionally male-dominated professions and vocational training.

An issue of great importance for women’s economic opportunities is procurement and inclusion in supply chains. On this topic, Makhaz Dzadzua, CEO of the microfinance organization Crystal, stated that, "We will encourage our business partners and suppliers to promote gender equality." In addition, Shorena Darchiashvili, Deputy CEO of the real estate company m2, noted that, "We will implement a Code of Ethics with our suppliers. It may be challenging, but we are ready for the challenge."