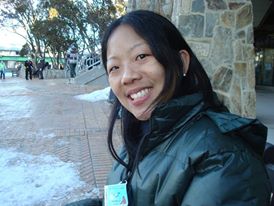 Nadine How Wan Chock is currently working as an embryologist in a fertility clinic in Australia but is from Mauritian origin. She wasn’t sure herself of what had inspired her to take such a pathway; but she does admit to having always been drawn to science (How the body functioned... and the mysteries of life...) since she was little. Looking at it now and even being quite ‘fresh’ into the job; she does not regret her choice as it is a very rewarding career.

Helping out couples who have difficulties in conceiving is summarising it in a nutshell! A lot of efforts, investment (Including: time, financial means etc) and hope is put in from all of patients wanting to fulfil that dream; and together with a dedicated team involving our clinician, nurses and every single one of our staff members, we strive to help them achieve this. It is surprising at the number of couples who come to her clinic- which is considered rather small- as compared to other big companies; and women from different ages, ethnicity and status seeking help to achieve a family.

Working in the field you then realise that a ‘normal’ process such as conceiving is taken so much for granted and couples struggling tend to feel left out and helpless. Many tend to blame the woman (much self- blaming is involved as well) for their situation; but people should start realising that it takes both halves to make a baby...and ‘problems’ can arise from either sides.

According to Nadine,  there has been so much changes in terms of economical growth, global networking and technology recently; women empowerment can be considered as “unfortunately” a late bloomer. Women have come a long way but are still struggling to obtain the same rights as men in the workplace. Mauritius is still struggling in her opinion, as she still considers it as a ‘patriarchal society’- and thus with a similar mentality; where women wanting to break through and having a career are still looked down upon- as they are ‘sacrificing’ their duties of upbringing a family and maintaining a home. It doesn’t matter where women are taking up jobs and which position it involves; male co-workers are still considered more capable in doing the job.

Not long ago; probably going up 2 generations only, most women in Mauritius were still “expected” to be stay at home housewives and looking after children while the husband was the sole bread winner. It was quite hard to change the mentality and has been very long in the making; but things are looking better in that aspect for women as more and more young females are aspiring pursuing a career in the field of their choice and aiming for higher managerial positions. Well; after all we do have a female president for a change!

Being able to have access to more education will definitely help in empowering women; as she believes that Mauritian women are as capable as men in achieving success. May it range from simple empowerment talks/ workshops in a local community or school, to being awarded scholarships or awards to attend overseas meetings and conferences will be good opportunities for Mauritian girls/ women of all ages to grow, network and strive.

Starting from the family and at a young age itself; empowering young girls/ women will help ‘break’ the ‘stereotypical’ thinking that males are considered to be ‘built for’ and best at doing ‘certain types’ of jobs! Hopefully in the near future; Mauritians in general will adopt and embrace genuinely the fact that women are as capable as men, given the same rights/ accessibilities and can therefore help for the country’s growth overall. This quote says it all: “If you teach a man to fish, he’ll eat for a lifetime. But you teach a woman to fish and she’ll feed the whole village.” - Hillary Clinton

Interestingly, her field is not a mainstream one; and is instead quite female- dominated. (Women are quite skilled with their hands and are more patient and meticulous. It is a fact that there may be more female embryologists as compared to our male colleagues. But as compared to the science/ medical industry in general and all industries overall; more males are at the top most position - being company directors, executives and chair persons.

Salary and remuneration standardisation (as compared to other medical/ scientific branches) is the current main ‘obstacle’ we currently face as most fertility clinics are privately owned. There are no standards set as such and of course private companies can make their own rules as they go. Recognition for hard work and achievements for women in general is  still ‘undermined’ in the workplace.

It is quite hard to answer that for now personally but in a more broadened view; more ombudsman organisations for work fairness and work rights in regards to women should be made available in the field that she works for.

Taking my personal experience as an example: Armed with 2 science degrees under my belt and after nearly 5 years of tertiary studies; it was rather a struggle to be able to secure a job. Yes; countless job applications and the long waits after interviews to be finally rejected numerous times due to ‘lack of experience’ was really the lowest point in my job seeking phase.

But keeping faith and never giving up is the best remedy- as hard as it may be to believe in sometimes. She was really privileged as she had full support from close family members, friends and loved ones- even after feeling like a ‘failure’ after opening another one of these ‘rejection’ letters.

Keeping in contact with her lecturers and making efforts to network with people in her field; she took up a part-time teaching job for science classes for undergraduate university students, attended conferences and was also blessed as her lecturers had accepted her going back to the research labs to keep on practising and be able to keep up my skills in embryology. And finally after nearly 2 years of job seeking in my field; she got accepted at her current workplace as well as got permanent residency approved in her country of adoption!

Her final advice will be “Do not give up; nothing is impossible! Seek for help when in need, strive and believe in yourself!”
Photographer & Videographer Credit: Nadine How Wan Chok