Women in STEAM: The Opportunity Within The Challenge 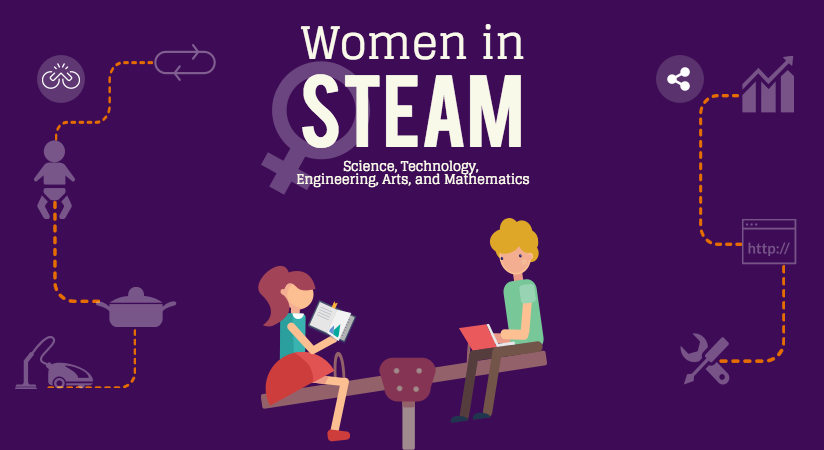 The science, technology, engineering, arts, and mathematics (STEAM) sector offers growing opportunities to transform the lives of women across the world. However, women remain vastly under-represented in the sector. We explore the barriers and the ways to help women become more fully involved.

By providing a gateway to learning, improving access to services, enhancing connectivity, creating business opportunities, and changing the way people communicate and engage with each other and with governments, information and communication technology (ICT) can transform our world. However, too often women are left out of this transformation, without access to the Internet, much less the ability to contribute to its construction.

In the US, there is a huge disparity between male and female participation in ICT, one of the country’s most important and growing industries. In 2014, for example, Google reported that women accounted for only 17 per cent of its tech employees. A similar gender gap exists at Microsoft, Apple and Intel, where women account for just 24 per cent, 29 per cent, and 24 per cent of jobs respectively, according to the tech diversity scorecard, produced by online magazine The Verge in 2015.

These numbers are not surprising, given that only 20 per cent of people taking the US AP Computer Science course are female, and that just 0.4 per cent of high school girls express an interest in majoring in computer science. Australia also has a chronic shortage of women graduating with computer science or coding skills. Since 2001, the proportion of women enrolling in information technology degrees has fallen from about one in four to just one in 10.

Alongside this gender disparity, an overall lack of trained professionals means most developed countries are forecasting an alarming shortfall in the number of skilled staff to fill future ICT jobs. The US Department of Labor, for example, projects that, by 2020, there will be 1.4 million computer specialist job openings, yet universities are expected to produce enough qualified graduates to fill only 29 per cent of these jobs. Meanwhile, the European Commission (EC) is urging its population to learn to code, warning that a lack of basic coding skills could result in a shortage of up to 900,000 ICT professionals in Europe by 2020. According to the EC, more than 90 per cent of professional occupations require some ICT competence. The European Union calculates that, in 10 years’ time, there will be 700,000 more ICT jobs than there are professionals to fill them. Globally, that shortfall is estimated to be closer to two million.

According to the 2013 Intel report Women and the Web, enabling Internet access for 150 million women worldwide would contribute an estimated $13-18 billion to the annual gross domestic product of 144 developing countries. The report also states that increasing Internet access in developing countries would improve education outcomes for more than 500 million women. The future of the ICT sector is promising. These are unchartered waters open to creativity, innovation and entirely new ways of working, interacting, and learning that should appeal to women and men alike.

However, experience from other sectors indicates that, even if women and men were equally represented in STEAM fields, this would not guarantee women’s access to decision-making positions, nor would it guarantee pay equity. Women now make up the majority of college graduates and approximately half of medical and law school graduates, for example. Yet only 21 per cent of partners at law firms are women and only about 10 to 20 per cent of medical school deans, full professors, organized medicine leaders and editors of powerful medical journals are women. According to the UNESCO Science Report: Towards 2030, women now account for 53 per cent of the world’s graduates and 43 per cent of PhDs but just 28 per cent of researchers. The report states that in the Arab region, female science and engineering graduates usually encounter a number of barriers to gainful employment, meaning many end up in low-level or informal positions. These barriers include ‘a lack of awareness about what a career in their chosen field entails, family bias against working in mixed-gender environments, and a lack of female role models’. Gender equality in the STEAM sector will not be achieved simply by ensuring that female graduates find employment. A combination of factors reduces the proportion of women at each stage of their STEAM career, as follows:

Teaching girls to code is a good start, but not knowing how to code is not the main reason girls are not becoming tech CEOs, venture capitalists, and/or equally paid employees. We need a new, more holistic approach that stimulates young women to be curious about ideating, coding, programming, designing, engineering and building products that solve problems and make the world a better and more inclusive place. It is in everyone’s best interests to make sure we equip them with the skills to do so.