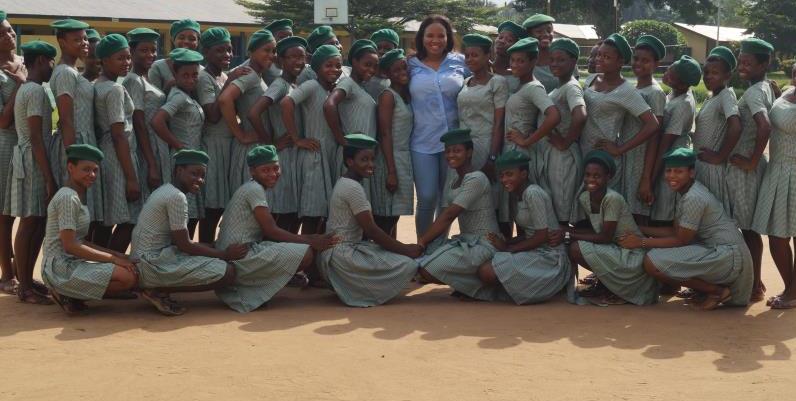 28 May is the Menstrual Hygiene Day! As part of my Empower Women Global Champions project, I wanted to share useful information with young girls and raise awareness about menstrual health. I chose a secondary school in the rural area of Essien Udim, Akwa Ibom state in Nigeria. My main objectives were to educate young girls on menstruation, debunk myths surrounding menstruation, provide them with sanitary pads, wipes and hand sanitizers to ensure maximum hygiene. We also placed emphasis on the importance of proper self-management as it is key to remain confident during menstruation. We encouraged junior students to talk to senior students about such issues and discuss among themselves without shame.

It was a sunny day and the parents/teachers assembly happened to be ongoing when I arrived. I was granted five minutes to address the assembly and I quickly introduced myself, the Empower Women platform and information on joining the movement. Then, I invited the parents to join us in the refectory where the lecture with the students was going to be held. About 500 young pre-pubertal and pubertal girls and 500 parents were present. The students were initially shy when the topic was introduced but I managed to capture their attention and interests. Minutes into the lectures, the students became relaxed and began to ask questions about aspects of menstruation that they did not understand, to which I was able to answer using key facts. We all had a good laugh making references to some of the behavioral changes that young girls often put up to conceal their periods and we tackled cramp management during menstruation. The students were encouraged to educate their fathers and brothers at home about menstruation. Lastly, we stressed on how communities were making a woman pay dearly whenever they declare it is a taboo and impede her to reach her full potential. The Principal, Rev. sister Mabel Abayol Doo, was very pleased with the project and requested that the school should more involved in similar projects to empower women.

This event made me reflect on the following: the greater the number of young girls and women we are able to reach and impact, the greater the future of empowering women worldwide. Through the Empower Women platform, I have learned that being a change maker requires taking little steps that add up to create gigantic outcomes as compared to my previous misconception, that it takes a lot to bring change. I have come to realize as a woman that the only barriers I have are the ones I permit. Let us continue to explore all avenues to Empower Women!