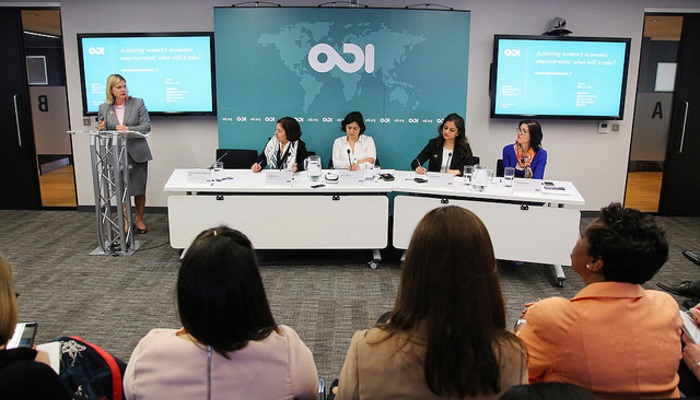 The consultation of the UN Secretary-General’s High-Level Panel (HLP) on Women’s Economic Empowerment was hosted by the Overseas Development Institute (ODI) on Monday, 16 May 2016 in London, the United Kingdom. Stakeholders from civil society, academia, government, business and beyond participated in a productive dialogue on women’s economic empowerment (WEE) and what it will take to achieve it.

Joy Lo Dico, an editor at the London Evening Standard, moderated the discussion.

Claire Melamed, Managing Director of the ODI, began by stressing that investing in WEE is crucial for poverty eradication and to enable governments to achieve the UN Sustainable Development Goals by 2030. She emphasised that women make enormous contributions to economies, whether as entrepreneurs, employees or at home, and that removing barriers to professional choices is vital for financial empowerment.

The Rt. Hon. Justine Greening, MP and Secretary of State for International Development in the UK, highlighted that WEE is good, not only for women themselves, but also for business and development.

She said: ‘No country can successfully develop sustainably if it leaves half of its population out of that process. If only half your population gets to benefit from your investment, then the investment can only work half as hard.’

Crucially, she stated, the panel must deliver clear strategies, outlining how society, businesses and governments can work together to achieve WEE. It should also develop solutions to help women from a range of cultures facing a wide range of issues. Greening concluded: ‘No one else is going to fix this. So let’s take the responsibility to make sure that this a historic report that has a historic impact’.

Fiza Farhan, CEO at the Buksh Foundation, focused on the situation in Pakistan, her country of origin. She stated that the lack of economic opportunities for women affects both private and public sectors, and that only 1.2% of Pakistan's women are in executive positions. Her own sector, the energy sector, is very male-dominated and she needed the Pakistani government to approve her role as CEO. She listed the top three reasons for continuing gender inequality in sectors such as energy as: the lack of economic opportunities, the existence of stereotypes, and the lack of role models and mentors.

Tina Fordham, Managing Director and Chief Global Policy Analyst at Citi Research, is described as one of the 100 most influential people in finance. She drew distinctions between different sectors. For example, while investors might be less inclined to have an open mind, change can occur more quickly in a company with more female customers, such as in fast-moving consumer goods. Tina’s expertise will help the panel analyse WEE from a technical standpoint on a macro scale.

Alicia Girón, Professor at the Economic Research Institute of the National University of Mexico and a feminist economist, focused on the economic implications of gender equality. She emphasised the need for governments to be aware of the impact of economic policies on women’s domestic lives, and the close relationship between micro and macro economics.

Participants posed questions to the panel on a range of issues, including the need to support refugees and migrants, the power of media intervention, the role of education, access to clean water, changing legal frameworks, and reproductive rights and childcare.

In relation to refugees and migrants, Justine Greening emphasised the importance of empowering people so that they are capable of supporting themselves and not dependent on international humanitarian aid.

On the influence of the media, Tina Fordham discussed India’s recent change in policy following protests about the rape of the woman who was returning from the cinema. She argued that, while events such as this are tragic, they have the power to create social change and focus minds in a powerful way.

Justine Greening referred to the idea as the push/pull concept: while in some countries, politicians are already in line with what people want and are pushing for change, in other areas laws need to catch up and politicians and policies must be pulled along. Social norms, attitudes and role models are important in achieving change, Greening said. It only takes one discussion, one contact to change someone’s life.

On education, Fiza Farhan drew attention to the fact that in Pakistan there are 1.1 million graduates, of whom 62% are women. Out of these women, 48% never get a job, while 15-20% have a job for just a couple of years before getting married. She stressed the importance of changing mindsets. For attitudes to change, schools need to engage families and parents in discussions about the importance of education and pursuing a professional career. She explained that mentoring councils exist for girls and their families at universities in Pakistan, and argued that such mentors should also be present in schools to deal with issues from an early age.

Discussing how to help women who struggle to access basics such as clean water, Fiza Farhan highlighted the potential impact of the private sector in creating ‘integrated and intelligent solutions’. She described the Lighting a Million Lights project in Pakistan, in which Farhan’s foundation provided access to solar energy for poor villages with no electricity. The project developed women as entrepreneurs, created a sustainable model and generated income.

Justine Greening argued that, in order to tackle issues such as reproductive rights and childcare, a life-cycle approach must be taken – changing prospects for adult women while also building opportunities for girls. One of the main barriers, she said, is that, ‘the minute girls hit puberty, they are at risk of being married, starting a family’, and therefore, they drop out of school. She stressed the importance of collecting data, for example, to discover where women are leaving education and to begin to address the issues behind those decisions.

In relation to persuading governments to initiate change, Justine Greening explained that sometimes it’s necessary to set out a business case. She used the example of the Ethiopian government, which calculated that getting every girl through secondary school would generate a further $4billion for the country’s economy. Greening explained that the former finance minister of Nigeria, Ngozi, was pushing for gender-responsive budgeting across government policies. This type of change can have a domino effect: the more that gender-responsive policies are implemented in each country, the stronger the country’s overall ability to improve WEE. She concluded that: ‘There is no silver bullet; we have to look around at different areas and implement change until it takes us past the tipping point’.

Tina Fordham focused on using a new vocabulary when talking about challenges, moving away from the language of rights and morality, and making challenges less about girls and more about families. She said: ‘We need to reframe the vocabulary so that it is harder to ignore and also, we need to show how expensive it is to maintain these policies through inaction’.

Fordham concluded that we must not give up on the idea of change. She used the issue of marriage equality as a successful example of a cause that has advanced quickly over a short time. ‘Change does happen’, she stated. ‘The key is to believe it, learn from other social agendas, tackle the attitudes that need to change, and implement the solutions.’

In their closing remarks, the panellists focused on the key steps needed to make the panel’s work a success. Once the problem is mapped, the focus needs to be on the accelerators that can help the most people in the shortest amount of time. Priority areas must be identified, followed by solutions and strategy.

In analysing attitudes and gathering data, the panel stated it is crucial to target men and boys as much as women and girls. By changing the attitudes of one group of people, for example by targeting businesses, a ripple effect will be created, reaching a much bigger audience.

Finally, the panel emphasised that the foundations for changing attitudes have already been laid. Many economically empowered women are in the labour market and are already transforming the world. 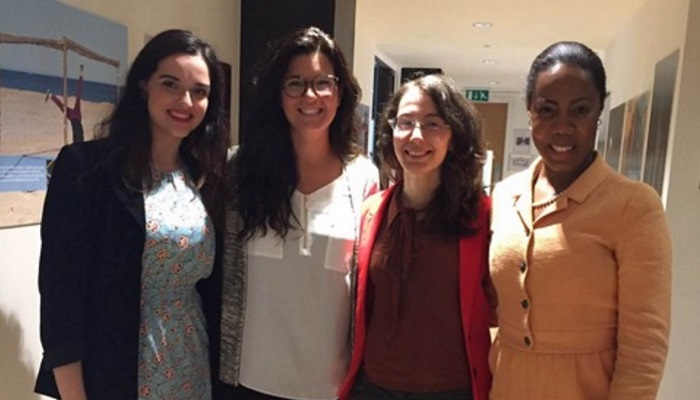 "I was curious, and seriously hopeful, about whether the panel would go beyond listing the problems that we already know and instead propose solutions, state how they will be implemented, and give us examples of where such strategies have worked before.

In my opinion, they did just that. I was excited to see the panel and the audience engage in a discussion that not only outlined the benefits of WEE to women, but to countries as a whole. There was a welcome sense of realism and practicality among the panel. I feel honoured to have taken part and genuinely look forward to the panel’s reports and the long awaited, necessary change."

"I am very grateful to have had an insider’s view of this important consultation. The discussion showed me the strong connection between economics and women’s rights. It made me realise that you cannot achieve gender equality without giving women financial freedom. This event was also a great opportunity to meet and exchange ideas with other Global Champions based in Europe."

"When I first applied to the Empower Women Championship, I was not sure about the activities it would entail. The experience so far has been extremely rewarding and enlightening. It has strengthened my personal belief that WEE is crucial in order to achieve gender equality, and it has given me the tools to present my own initiatives to raise awareness about the topic. I strongly believe that civil society and government leaders should join forces to keep this topic in the spotlight. Joining this panel was a great opportunity to meet other fellow champions, and I felt honoured to be part of this amazing group."

"Attending the panel was a wonderful opportunity to meet with, and hear from, incredible women and men advancing WEE globally. I witness on a daily basis how the lives of many women and girls are affected by gender inequality in the UK – such as the 12,000 lives affected by honour-based violence since 2010 and the women and girls of ethnic minorities whose voices are still not heard or understood by the government. I longed for more dialogue on the challenges faced by ethnic minority women in the UK and Europe, as well as representation on the panel from grassroots organisations representing ethnic minority women and girls in the UK. The panel called for strategies and solutions to address the barriers to WEE for all cultures, which I greatly welcome."

Concepts of WEE MDGs and beyond
3 of 3 comments