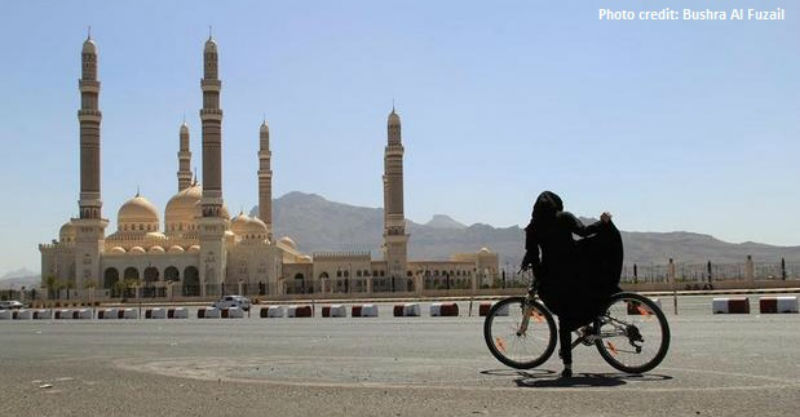 I grew up in a historic district of Jiddah, Saudi Arabia, which for decades has been home to a large community of Yemeni traders. I taught English to the young son of our Yemeni neighbours. His mother would bake traditional breads for us as a way of thanking us since she could not afford to send her son to school. We called her simply Umm Abdullah—meaning ‘mother of Abdullah’—and she was one of the many Yemeni women whose determination and dexterity always impressed and inspired me. Umm Abdullah was not literate but her wisdom and commitment to her craft made her extraordinary.

Historically, Yemen used to be one of the region’s richest countries. It had natural gas, rich mineral deposits, tourism and archaeological treasures; and on the coast, Aden was a major deep-water port for decades. And yet, despite its strategic position on one of the largest shipping lanes in the world—‘Bab El Mandeb’, between the Arabian Peninsula and the Horn of Africa—Yemen remains one of world’s most economically underdeveloped countries. In the latest rankings of the Human Development Index, the country is now ranked in 154th place, one of the lowest rankings in the Arab world.

Its burden of poverty and frail social progress is manifested in many ways among women and children. Just 49% of women aged 15 and over can read and write, compared to 82% men (2011). According to the Global Gender Gap Report 2014, the difference between the numbers of girls and boys enrolled in education, and between their relative literacy rates, is among the largest in the world. While much of the world is fixated on Yemen’s mineral and oil resources, it seems to me that Yemen’s wealth is not under the ground. It is above it; within the Yemeni women.

In such complex economic, political and social environment, what would Yemen’s women entrepreneurs and businesswomen need to thrive? A 2012 study, Measuring Women’s Status in Yemen, shows that despite a ‘fragile and unstable economy’, Yemeni women still look for ways to get training and funding to start their own business. Almost one in two women (47%) would like to start their own businesses, and the vast majority are young unemployed women between 18 and 24.

The Small Micro Enterprises Promotion Service Agency (SMEPS) offers hope for the aspirations of these entrepreneurs in Yemen. Wesem Qaid, SMEPS’ Executive Director, recently started a hashtag on Twitter, #Yemen_women_exists. It draws attention to the voices and needs of Yemeni women.

I asked Mr. Qaid how he believes better outcomes could come from incorporating women’s voices into political/economic dialogue. This is what he said:

“For me the political process side line all of society, not just women. The process has never been grassroots enough; we did not hear the voices of the tens of thousands of women that carry water each day up and down from our challenging mountains. These are working women without a wage; they massively contribute to Yemen's GDP by growing coffee, grains and fruits. Yet we have not asked them what form of government they want to see even though hundreds of thousands of Yemeni women, perhaps the majority of the country’s women, are economically productive and feeding a nation.

Even the businesswomen he works with in the capital city of Sana'a and in Yemen’s commercial capital, Aden, have no formal mechanisms to make their voices heard. That is why I setup the hash tag #Yemen_women_exist.

It is a start, although very few Yemeni women are online and even fewer have a Twitter account, but my colleagues and I wanted to get the ball rolling. As a result, we have heard of terrible situations experienced by Yemeni businesswomen, and we have tried to give these women a voice. For instance, Yemeni women told of their long waits in queues outside commercial banks to withdraw their dollar savings, and being refused. They were only offered depreciating Yemeni currency, whereas men in the same queues left the bank with swags of dollars in hand.

What is needed, is a supportive networks and networking opportunities for women. Networking among women themselves and across gender, sector, region and politics is a necessary mechanism. Incorporating women's voices needs to move beyond supporting civil society organizations and start setting quotas; for example, 30% of women being included in the national dialogue. There is a need to stimulate effective networking to create an environment where that supports women to form generic social movements.”

In 2008, Talook's coffee was considered below the 'speciality coffee' grade. After an intense programme run by SMEP and the Talook Women's Association, growing, harvesting and post-harvest practices were improved and Talook's coffee has made its name in the 'gourmet' market. In October 2013, the Talook women’s coffee achieved third place in the Dubai Barista championship and is now being exported to Dubai at a premium price. Their practices and expertise are also being replicated and scaled up in other Yemeni regions.

More than a name-change

SEMPS works with a range of regional, national and international bodies including UNDP, ILO and the World Bank and what was until recently the Yemen Businessmen’s Club. The Yemen Business Club (YBC) has done more than just drop the word 'men' from its name. It has also worked hard to increase women’s membership by establishing a businesswomen's programme.

The club has set up networking sessions. In meetings with tax administrators, for instance, businesswomen have been able to discuss topics such as corruption, since exploitation by tax officers of new female entrepreneurs is not uncommon.

Yemen’s political climate remains uncertain, and its internal conflicts and wars mean that any progress remains fragile. For example, a study presented at the National Women’s Conference, organized in 2012 by Counterpart International, the Human Rights Ministry and the National Women’s Committee, showed that Yemeni women’s participation in economic development rose from 9.6% in 2004 to 10.8% in 2006 – but by 2010, it had dropped back to 9.7%.

The 2010 Status of Women in the Middle East and North Africa (SWMENA) survey asked Yemeni women: “If you were no longer able to depend on your husband’s or family’s income, would you be able to support yourself and your family financially?” Two thirds (67%) of those who were married, widowed, or divorced said no.

Wars and other internal conflicts have taken away any sense of stability and increased perceptions of economic insecurity, not to mention fears of destruction and death. To maintain any momentum towards a better quality of life, especially for young women entering the labour market for the first time who lack business support and role models, support for entrepreneurs and the business community is crucial.

SEMS has ambitions to reach more women entrepreneurs, working with YBC and the Federation of Chambers of Commerce to support them. However, efforts and resources in much of Yemeni society are being diverted towards support for the victims of the current war.

Mr. Qaid says: “My team in Taiz and Aden are working day and night to help thousands of internally displaced people to find shelter. We are frantically attempting to attract funds for our work to help the young people among them to find decent employment, to try to keep them hopeful and out of combat.”