In Gaza Women In Technology Can Transcend Borders 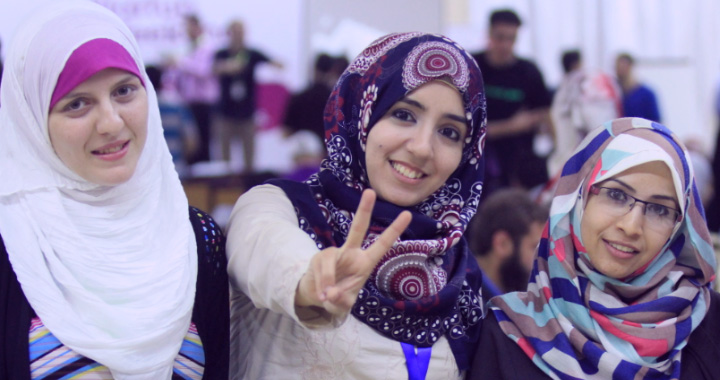 Girls in Gaza grow up without ever hearing the stereotype that boys are better at math and science. “Here in Gaza, nine out of ten of the top high school graduates in those fields are women. We’re smarter than boys,” says one young woman.

Gaza Sky Geeks (GSG), a startup accelerator, identified this as an unusual opportunity to create jobs in a part of the world where unemployment hovers around 50%. GSG was founded in 2011 by Mercy Corps. Between 2011 and 2014, GSG hosted over 100 trainings for more than 1,500 Gazans. Women’s participation was about 30% for the first three years.

In 2014, GSG set a goal to increase women’s participation and leadership to 50%. The accelerator ran a “Little Sister/ Big Sister” outreach programme that paired Gaza’s pioneering female start-up founders with young women who showed potential. By the end of the year, women’s participation at GSG events had increased to 49%.

One future leader is Sofiya Mosalem, who was sixteen-years-old when she joined the programme. She had never heard of start-ups previously. Now, she is working on a website and mobile app for moms in the Arab world.

GSG was launched in 2011 with a $900,000 donation from Google.org, the charitable arm of Google. By the end of 2014, the GSG team set out to find additional funding to keep the accelerator running and growing.

Crowdfunding was a new approach for Mercy Corps as an organization, enabling it to tap into the global start-up community and not only secure the funding they needed right away, but also build connections that would help the start-ups with their future growth.

The campaign, which ended on January 2015, raised $267,000. The funding will keep GSG fully staffed and operational for another year. It will also allow the accelerator to run another round of the “Big Sister/Little Sister” outreach programme and organize a major event for young entrepreneurs.