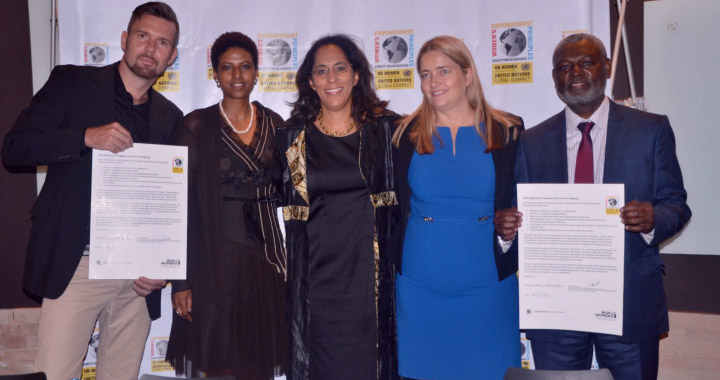 Today, the Gulf African Bank and the Tribe Hotel in Kenya made commitments towards the Women Empowerment Principles (WEPs). Mr. Abdalla Abdulkhalik, Managing Director of the Gulf African Bank, and Mr. Stephan Merves, General Manager at the Tribe Hotel, signed the CEO Statement of Support at the WEPs Awareness and Sign up cocktail ceremony for companies involved in and around the extractive industries. Mr. Stephan Merves cited Kofi Annan’s words “There is no tool for development more effective than the empowerment of women.”

The WEPs event was held on 14 October 2015 at the Tribe Hotel in Nairobi as part of the three-day Regional Sharefair on Gender Equality in the Extractive Industries. The Sharefair, hosted by UN Women and its key partners, brought together governments, private sector and civil society organizations to discuss and share experiences on gender issues in the management of natural resource development. For details about the Sharefair, please see here.

The cocktail brought together over 100 entrepreneurs, many of whom entrepreneurs who have broken through the gender barriers in the oil, gas and mining sector in Africa and beyond. It aimed to promote the WEPs, raise companies’ awareness of the seven principles, and provide participants with a platform for networking.

In her opening remarks, Ms. Simone ellis Oluoch-Olunya, UN Women’s Deputy Regional Director, Eastern and Southern Africa Region, reiterated that empowering women and promoting inclusiveness is not only the right thing to do but it also makes business sense. She highlighted UN Women’s work with governments, civil society organizations, the academia as well as the private sector that aim at eliminating all forms of discrimination against women and promote inclusive social and economic development.

She said, “I strongly believe that the narrative must change and that we must look into ways to harness the great potential of women as the largest market in the world, and the greatest national resource for knowledge, talent and investment. Unless gender inequality is addressed, transformational governance; human capital development; inclusive and sustainable economic growth; environmental sustainability, land management and human security cannot be fully realized.”

She added that the WEPs offer one way to transform the private sector through practical guidance on how to empower women in the workplace, marketplace and community.

As a panelist at the event, Ms. Anna Falth, Manager of Empower Women, presented an overview of the WEPs and their linkages with the extractive industry agenda. She pointed out that as of 14 October, 1,047 companies have signed the WEPs of which 60 in Africa, that is, 47 in South Africa; seven in Kenya; three in Nigeria; and one in Ethiopia, Cameroon and Ghana. She identified leadership as one of the critical drivers of WEPs implementation, and emphasized “Top level commitment to this agenda requires establishing company-wide goals and targets. As we say, what gets measured, gets done. And, who knows that better than the private sector?” stated Ms. Falth

Ms. Anna Falth further shared commitments from selected companies who have signed to the WEPs and who recognize that involving women in business makes business sense. A statement from the CEO of Alcatel-Lucent recognized the capabilities of women in business. Ben Verwaayen, CEO, Alcatel-Lucent stated in theCEO Statement “We cannot afford to squander the capabilities of 50% of the population because of old customs. We need to embrace new thinking, new ways of rebuilding our societies, economies and businesses.” See additional examples of gender-responsive companies.

Since the launch of the “Women’s Empowerment Principles: Equality Means Business Initiative” in March 2010, many businesses have publicly declared their support for gender equality by signing the associated CEO Statement of Support. In doing so, businesses have demonstrated growing recognition of the business case for empowering women. European Union data of 2012 confirms the positive link between gender equality and a business’ improved financial performance.

In her closing remarks, Ms. Zebib Kavuma, UN Women Kenya Country Representative, reaffirmed that investing in women is not only the right thing to do, but also the smart thing to do because it makes business sense. 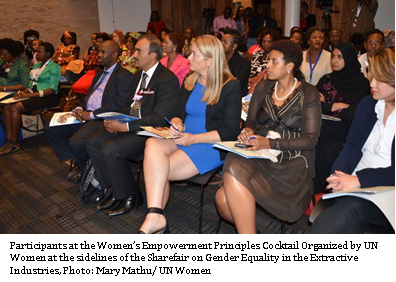 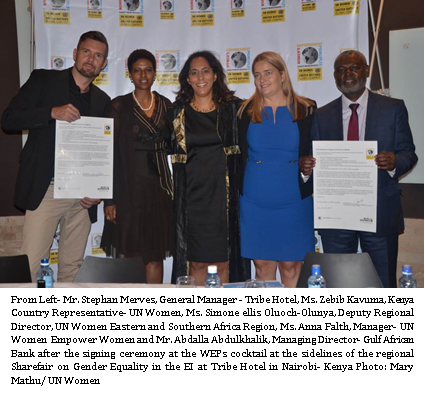 #WeLearn: Develop Your Own Leadership Style

Implementing the WEPs in Fragile and Conflict-Affected States

#WeLearn: Is Entrepreneurship for You?

The Power of Working Together: Gender Equality in The Workplace, Marketplace and Community